Pac-Man and the Ghostly Adventures Wiki
Register
Don't have an account?
Sign In
Advertisement
in: Characters, Male Characters, Enemies,
and 3 more

Lord of the Netherworld

Lord Betrayus Spheros is the lord of the Netherworld and is the main antagonist in Pac-Man and the Ghostly Adventures. Betrayus is the little brother of Stratos Spheros.

Not much is known about Betrayus's early life. Not much, other than he was in a sibling rivalry with his brother, Stratos Spheros. Stratus was typically viewed as the preferred and perfect child, and Betrayus fought in vain to stay out of his shadow. This lead to a strong sense of jealousy against his brother.

Betrayus climbed to power and started a war prior to the series, likely to gain control over Pacworld and become a ruler by force. This was, once again, likely due to the fact he wanted to outshine his brother.

He later lost to the Freedom Fighters and was stripped of his corporeal body, and was sent to the Nether Realm with his accomplices to rule there instead.

Betrayus is always planning and finding new ways to try and get his true body back and to start a new war, and he does this by stalking Pacman and his accomplices, and even trying to find ways into his brother's office. He longs to find the Repository, however he has not yet found it and likely never will.

Betrayus has white and red eyes and red glowing pupils in them, sharp teeth, a red glowing ragged tail, dark rings around his eyes, a goatee, and white-brown-red spikes for hair. As ghosts don't have any hands, Betrayus wears belted black prosthetic gloves with iron claws.

Betrayus takes on similar features. He instead takes on dark red eyes, black hair ending in a red hue, with black-red pointed boots and black-white gloves. He wears golden shoulder pads and a badge, likely to indicate his social standing.

Betrayus is selfish, sneaky, egotistical and short-tempered. He is rather sadistic and enjoys terrorizing others.

Betrayus is often found stalking Pacworld through his slug cams, commonly found spying on Pac and his friends to carefully plot his next step in getting his mortal body back. He commonly blames his butler for all of his shortcomings, and is normally quite dramatic, over the top and childish. Pac has also eaten him on rare occasions. 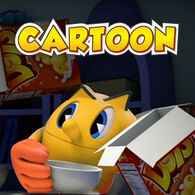