Pac-Man and the Ghostly Adventures Wiki
Register
Don't have an account?
Sign In
Advertisement
in: Females, Pac-Worlders, Allies, Characters

Elli has a pink body and pink eyes. Her hair is pink with blue streaks and is put up into an odango style with hair pins. She wears gloves with hearts, and shoes that were mismatched into red and blue. Elli was first seen in her debuted episode with a strawberry bag.

Elliptica is a kind, beautiful, fashionable and intelligent girl. When she’s excited or grossed out, she switches to her native language. She's also been known to be very stubborn. Despite this, she is also courageous and able to fight. 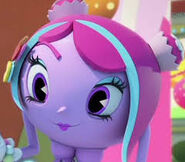 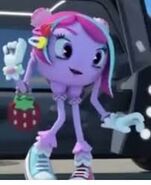