Pac-Man and the Ghostly Adventures Wiki
Register
Don't have an account?
Sign In
Advertisement
in: Characters, Male Characters, Heroes,
and 2 more

No Pets Allowed...Especially Monsters! Part I

Sir Cumference is a supporting character in Pac-Man and the Ghostly Adventures. He is a famous inventor and has a robotic assistant named Grinder. He has a pet named Fuzbitz. His best friend is President Spheros.

Sir Cumference had a long rivalry with Dr. Buttocks, in which case to compete with better inventions. He is good friends with President Spheros, Zac, Sunny, and Spheria. Sir Cumference is usually appeared to be forgetful. 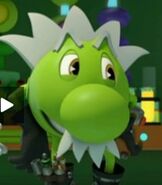