Pac-Man and the Ghostly Adventures Wiki
Register
Don't have an account?
Sign In
Advertisement
in: Females, Characters, Pac-Worlders, Allies

Pac to the Future

Spheria is Pac-Man's aunt. She speaks in a Southern accent. She adopted Pac after his parents' disappearance in the Pac-World Wars, during which time she served as a sergeant in the Freedom Fighters. She was a great Pac-Pong player back in her youth. She owns a dog named Uggles.

She had brown hair in a ponytail when she was young.

She's very nice and forgiving, but also tough, as she does not tolerate treachery or injustice well. She also has a pronounced competitive streak.

Spheria is skilled with weapons in her youth during the Pac World Wars. She is also good at Pac-Pong, as seen when she beat Betrayus in a match in Pac-Pong Fever.

Her sister and fellow resistance member.

Her brother-in-law and fellow resistance member.

Spheria is the love interest of Sir Cumference.

Spheria and Betrayus are natural enemies. They fought in a Pac Pong match. They were tied together in the match and in the breaker Spheria won. Betrayus got very upset about this, threatening to tell on Spheros to their mother about giving Spheria the point, and lay down crying and sucking his thumb insisting that Spheria had cheated. He also lost in an unfair rematch. According to Dr. Buttocks, Betrayus had a huge crush on Spheria but she wouldn't give him the time of day. 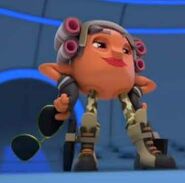 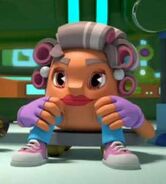